Spoiler alert! The following contains details from the Season 5 premiere of Fox’s “The Masked Singer,” including the identity of the unmasked celebrity.

“The Masked Singer” returned Wednesday with several changes to the competition. For starters, “Reno 911!’ actress Niecy Nash filled in as host, because the usual “Masked” master of ceremonies, Nick Cannon, contracted COVID-19 and has been sidelined. He will return as host later in the season.

Nash wasn’t the only new face to be seen. A new costumed celeb, who goes by the name of Cluedle-Doo, offered additional info about the contestants. The show also teased four more faces, or at least their forms: the Wildcards of the competition, who will come in and disrupt the show’s traditional order. From what we could deduce from their silhouettes, the Wildcard group appears to include a crab, dolphin, wolf and… nope, sorry, we have no idea what that was.

One thing that stayed the same are the show’s sleuths and judges: Ken Jeong, Jenny McCarthy, Nicole Scherzinger and Robin Thicke. Here’s how the night went.

Robin Thicke says new album, first in six years, is like ‘sunshine coming out after the rain’

Clues: Cluedle-Doo says “a Russian Doll can sometimes have 15 replicas of itself.” Noted, and we also made mental notes of items in the clue package, including the Mizfitz Toyz Store, a pitcher of milk, puppet strings, and several cardboard boxes.

During Russian Doll’s performance of Michael Jackson’s “Man in the Mirror,” it was revealed the costume represents two contestants.

Guesses: McCarthy thought of Lady A band members Hillary Scott and Charles Kelley, or the singers of Boyz II Men, while Scherzinger threw out several actors: Vanessa Hudgens, Darren Criss, Matthew Morrison and Kevin McHale. Jeong had No Doubt about his guess of singer Gwen Stefani and guitarist Tom Dumont.

Clues: What did Cluedle have to say about Seashell? “No two shells are the same.” The contestant’s clue package provided more insight in the form of a hot dog with relish, a chameleon, cowboy hat and broom. Seashell also revealed she hasn’t sung in quite a while.

Guesses: After they heard Seashell’s performance of “Listen to Your Heart” by Roxette, the panel revealed what their guts were telling them. Jeong went with “Holidate” actress Kristin Chenoweth, while Scherzinger thought of “Younger” star Hilary Duff. McCarthy and Thicke liked singer/businesswoman Jessica Simpson, but Thicke also suspected Seashell might be “9-1-1” star Jennifer Love Hewitt.

Clues: Thanks to Cluedle, we know “Raccoon is known for being sharp.” And thanks to his clue package, we know he’s overcome grave trials, including serving time in prison. “In my darkest days, I faced death,” he shared. Raccoon also said “The Hunchback of Notre-Dame” is his favorite story.

Guesses: Raccoon’s unconventional rendition of The Troggs’ “Wild Thing” wowed the panel. Scherzinger believed he could be actors Gary Busey or Nick Nolte or perhaps musician Sammy Hagar. Jeong hoped to knock out his fellow panelists with his guess of boxer Mike Tyson, while Thicke went with actor Danny DeVito.

LeAnn Rimes dishes on ‘Masked Singer’ win, new music: ‘I can’t listen to it without crying’

‘The Masked Singer’ Season 4 contestants unmasked: And the winner is…

Clues: Cluedle shared that this contestant “is skilled at not becoming roadkill.” Robopine’s clue package featured a laboratory, a lock and key and brick cell phones. Following his performance of Luther Vandross’ “Never Too Much,” Robopine told the panel he is 60 and has grandchildren.

Guesses: Impressed with his moves, the judges were hesitant to believe the contestant’s age. Scherzinger thought musically-inclined actors Idris Elba, Donald Glover, or Jamie Foxx could be beneath the quills. Jeong guessed Lionel Richie, while Thicke feels Ginuwine-ly good about going with the “Pony” singer. 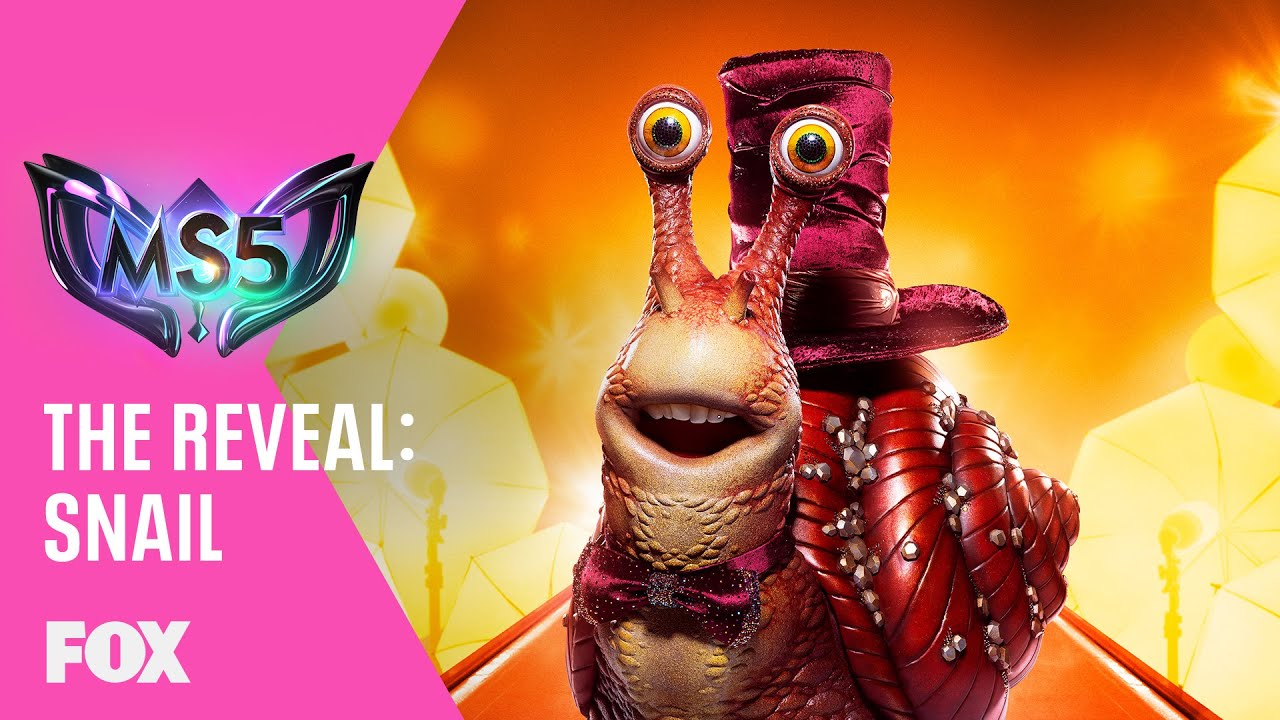 Snail was the first contestant to be axed in Season 5. Before the star’s unmasking, the panel’s first-impression and final guesses were revealed. Thicke stuck with his original guess of “Family Guy” co-creator MacFarlane. Jeong also kept to his first instinct, Leno. McCarthy and Scherzinger – who both first thought of radio host Adam Carolla – swapped that guess for Sen. Ted Cruz and comedian Billy Crystal, respectively.

The Snail turned out to be Kermit the Frog, a reveal that stunned the judges. Thicke and McCarthy kicked themselves for not giving more credit to their first hunches.

“The first thing I thought of was Kermit the Frog,” Thicke said laughing.

“I literally said it out loud,” said McCarthy. “I go, ‘It sounds like Kermit the Frog.’ “

Jeong hailed the challenger as “The most famous guest on ‘The Masked Singer’ ever!” and it was an experience the Muppet will treasure.

“Well you know what, I have had just a great time being here,” said Kermit, “so it’s really been a pleasure.”

Episodes of “The Masked Singer” can be viewed on Fox’s website.

What is the safest airplane? Modern flight safety features explained

How to watch, what to know about the star-studded 2021 'MTV Movie & TV Awards'

Dick Strawbridge and Angel speak out on 'silly’ Escape to the...