The woke mob is everywhere: Here's where it came from and how one critic believes it can be stopped

Derek Chauvin trial live: Minneapolis lieutenant says Chauvin's use of his knee on the neck not taught to officers 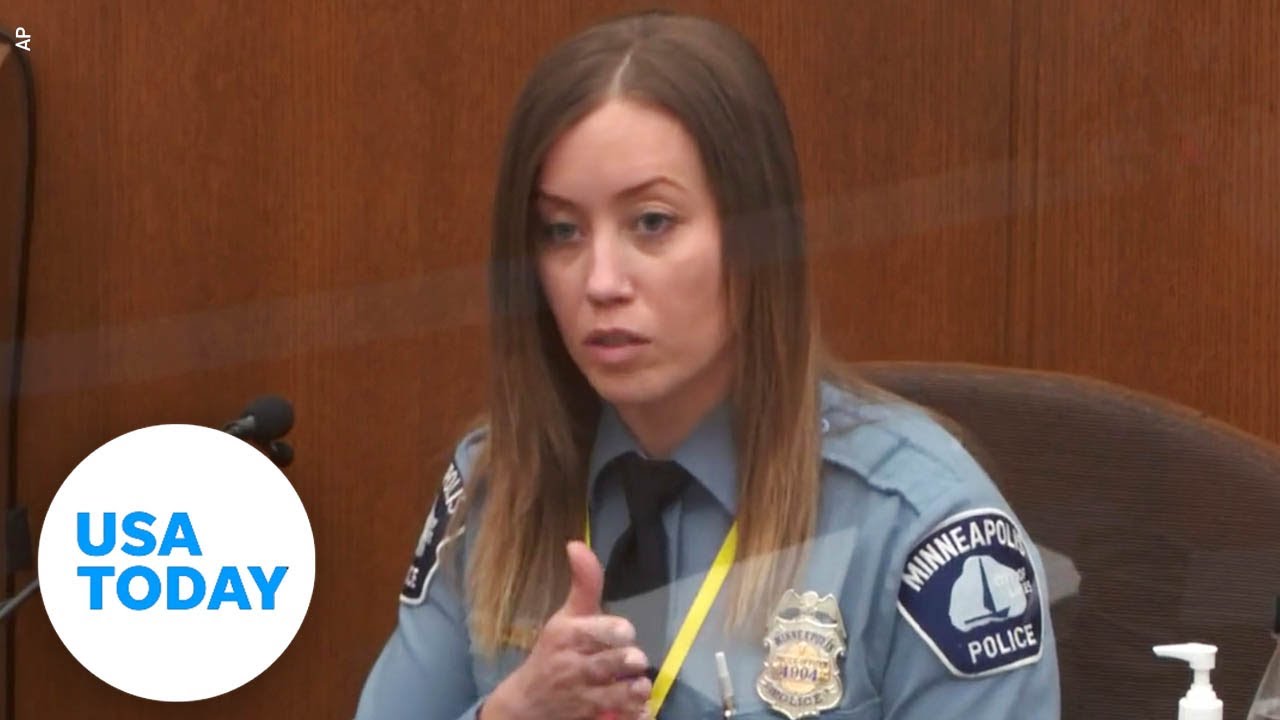 MINNEAPOLIS — Jurors in the Derek Chauvin trial heard from two Minneapolis police officers on Tuesday who testified about the crisis intervention and use of force training officers receive.

The testimony comes a day after Minneapolis Police Chief Medaria Arradondo told jurors that Chauvin’s restraint of George Floyd “absolutely” violated department policy. He said that the restraint should have stopped “once Mr. Floyd stopped resisting” and “once he was in distress and verbalized it.”

Former police officer Derek Chauvin is facing murder and manslaughter charges. Floyd, a Black man, died in police custody on May 25, 2020, after Chauvin, who is white, pinned his knee against Floyd’s neck for more than nine minutes.

Johnny Mercil, a Minneapolis Police Department lieutenant who taught a use of force class that was attended by Derek Chauvin, took the witness stand Tuesday. He said Minneapolis officers are trained on jiu-jitsu among other uses of force.

Brazilian jiu-jitsu is a form of martial arts that focuses on leverage, deemphasizes striking a person, and uses joint locks, pain compliance, and body control to get people to comply. Pain compliance is a technique that causes the other person experiencing the pain to comply – it’s sort of like the game mercy, Mercil agreed.

The prosecution showed jurors paperwork that shows Mercil taught a use of force course on Oct. 1, 2018, that Chauvin attended.

Sanctity of life and the protection of the public is a cornerstone of the use of force policy, Mercil said. Use of force includes applying a restraint, which must be reasonable, per the U.S. Constitution’s Fourth Amendment, and a 1989 Supreme Court case.

Force must also be proportional, which means it must be the least amount of force necessary to maintain control over a person and proportional to the level of resistance an officer is getting from the subject the officer is using force on, Mercil said. If it does not work, then more force may be allowed.

“If you can use a lower level of force to meet your objectives it’s better and safer for everyone involved,” Mercil said.

Prosecutor Steve Schleicher showed Mercil an image of Chauvin with his knee on Floyd’s neck and asked if it showed the department-trained neck restraint. Mercil, who teaches officers physically how to do neck restraints, said it does not.

He said a knee on the neck can be authorized in use of force, but it depends on the time frame and the type of resistance the officer is faced with. If the subject is handcuffed and not resisting, it is not authorized, Mercil said. Once the subject is handcuffed and compliant or not resisting, then it’s “an appropriate time” for the officer to move their knee, Mercil said.

“There’s the possibility and risk that some people have trouble breathing when they’re handcuffed (to their back) and on their stomach,” Mercil said.

One reason to roll a person to their side is to prevent positional asphyxia, Mercil said. The officer should turn the person to this position “sooner the better,” though he noted it depends on the situation and environment.

Officers should change their force if the force they’re facing changes to the situation upon reassessment, Mercil said.

Under questioning by Chauvin’s attorney, Eric Nelson, Mercil acknowledged use of force techniques do not have a strict application in every instance and that officers are taught to be fluid and react to the circumstances they face.

Mercil also agreed under questioning that some people make excuses to avoid arrest, and that he has had suspects say “I can’t breathe” when he was trying to arrest them.

Sgt. Ker Yang answered questions from prosecutor Steve Schleicher on the witness stand Tuesday morning. The government’s questioning was focused on showing that Derek Chauvin received specific training for the type of confrontation he ultimately faced with George Floyd in May 2020.

Yang confirmed records that show Chauvin completed a 40-hour crisis intervention training program in 2016 at the department’s training division. He said the training is designed to enable officers to make decisions as they interact with people in crisis.

The ultimate goal, he said, “is to see if that person needs help,” from medical personnel or other assistance. Yang agreed that intoxication by alcohol or drugs can pose a crisis.

On cross examination, Nelson repeated a line of questioning he used Monday with Minneapolis Police Chief Medaria Arradondo that reminded jurors that Chauvin and other officers struggled with Floyd and simultaneously received criticism from bystanders who watched and filmed.

Morries Hall, who was in vehicle with George Floyd, appears before the court

Judge Peter Cahill won’t immediately let a man who was in a car with George Floyd avoid testifying in the trial of former police officer Derek Chauvin.

Cahill instructed defense and government lawyers to draft narrowly tailored questions for Morries Hall, who appeared before the court Tuesday via Zoom. He is being held at the Hennepin County Public Safety Facility on unrelated charges.

Hall has been subpoenaed to appear as a witness by both the Chauvin defense and the government. However, Hall filed a motion late last month to quash the subpoena on grounds that he would invoke his Fifth Amendment right against incrimination and refuse to answer questions if he’s forced to testify.

The judge said he would schedule another hearing after Hall has an opportunity to review the questions with Adrienne Cousins, an assistant public defender representing Hall.

Hall’s name came up in questioning last week. Lead defense attorney Eric Nelson asked Floyd’s girlfriend, Courteney Ross, about Hall. Ross acknowledged that she told FBI investigators Floyd bought narcotics from Hall, but in court she said she “did not see it with my own eyes.”

Ross said she was in a car at a hotel while Floyd bought pills a week before his death. She said she was on the phone with him and thought she heard Hall’s voice in the background. She testified that she only learned afterward that Floyd was with Hall the day Floyd died.

Minneapolis Police Chief Medaria Arradondo, who fired Derek Chauvin and three other officers involved in the incident, said Monday under questioning that he believed Chauvin was trying to employ a conscious neck restraint on Floyd, which involves using light to moderate pressure on a person who is actively resisting police, according to the department’s policy.

But while viewing a still-frame of Chauvin kneeling on Floyd’s neck, Arradando said from the picture and Floyd’s facial expression, it “does not appear in any way, shape or form, that that is light to moderate pressure.” Arradando added: “I vehemently disagree that that’s the appropriate use of force for that situation.”

The restraint should have stopped “once Mr. Floyd stopped resisting” and “once he was in distress and verbalized it,” Arradondo said. He added that “there’s an initial reasonableness in trying to get him under control in the first few seconds” only.

“And clearly when Mr. Floyd was no longer responsive and even motionless, to continue to apply that level of force to a person proned out, handcuffed behind their back. That in no way shape or form is not backed by policy, it is not backed by our training, and it’s certainly not our ethics or our values,” Arradondo said.

Arradondo said the officers violated department policy by failing to give first aid to Floyd when he appeared to not be breathing, while they waited for an ambulance.

On cross-examination by defense attorney Eric Nelson, Arradondo acknowledged that he had not made an arrest, personally, in many years. He also acknowledged that in a side-by-side comparison of bystander video and an officer’s body-cam video, it appears that in the latter, Chauvin’s knee is more on Floyd’s shoulder blade than on his neck.

The moment in the video came at the end of the incident, after paramedics arrived and checked Floyd’s neck for a pulse. In the body-cam video, Chauvin can be seen shifting his knees and leaning back slightly.

Doctor tells jurors he believed lack of oxygen, not overdose or heart attack, was ‘most likely’ cause of death

Dr. Bradford Langenfeld testified Monday morning, telling jurors he directed the care of Floyd at Hennepin County Medical Center and spent about 30 minutes trying resuscitate him before pronouncing him dead.

Questioned by prosecutor Jerry Blackwell, Langenfeld said the paramedics who brought Floyd to the hospital did not give him any information that Floyd might have overdosed on drugs or suffered a heart attack.

Langenfeld said Floyd had some electrical activity around the heart, but no pulse. Floyd’s heart never resumed beating on its own “to a degree necessary to sustain life,” he said.

Asked by Blackwell what was determined to be the cause of Floyd’s cardiac arrest, Langenfeld said: “At the time, based on the history available to me, I felt that hypoxia was one of the most likely possibilities.” Hypoxia is a lack of oxygen, which Langenfeld said he believed led to Floyd’s death from asphyxia.

USA TODAY Sports picks every medal for every Olympic event

Coach purses, wallets and more are 50% off right now—shop our top picks

The woke mob is everywhere: Here's where it came from and how one critic believes it can be stopped