At 21, Fernando Tatis Jr. already carries the 'Face of Baseball' label, even as MLB aims to diversify the field


For all its modernization, baseball remains the most deliberate of pastimes, where patience is rewarded, seven-month sample sizes outflank isolated moments of brilliance and its most compelling figures often have minimal impact on the outcome.

Such randomness remains integral to the game’s charm, yet a hurdle to superstardom in an increasingly noisy world. And so when it comes to anointing the next big thing, the game often can’t help itself.

Major League Baseball, hungry for relevance among the youngest demographics, shines a spotlight on its emerging stars from the moment they exit the team bus.

A media industry struggling to cultivate audience moves on quickly from one buzzy star to the next, perpetually eager to unearth the next “face of baseball.”

And advertisers, operating in a world where A-list celebs’ reach can be topped by a TikTok-ing potato factory worker lip-syncing Fleetwood Mac while chugging cranberry juice on a skateboard, go all-in on nascent curiosities rather than established talents.

As MLB’s 2021 season gets underway, there is little doubt that Fernando Tatis is That Guy.

You can see it in his endorsements: Tatis joined Derek Jeter and Bryce Harper as the only ballplayers as the sole focus of a national ad campaign from longtime MLB partner Gatorade. Just 21, he will be the youngest player to earn the coveted cover slot on MLB: The Show, the sport’s most wide-reaching video game.

You can see it in his influence: Tatis’ San Diego Padres had not appeared on a national broadcast since 2009, according to MLB, yet will grace ESPN’s Sunday Night Baseball twice – April 25 against the Dodgers, May 15 against the Cardinals – in the season’s first six weeks.

And you can see it in his game: A freakishly talented shortstop, Tatis’ lifetime OPS of .956, his 2020 Silver Slugger Award and the elan with which he celebrates it all ooze both production and charisma.

That Tatis has not yet played even 100 games in a season – and just 143 in his career – only tempers the enthusiasm so much. After all, the Padres themselves did not hesitate to commit $340 million over 14 years to Tatis this winter, a sum that may, yes, prove to be a bargain. And its owner, Peter Seidler, did not hesitate to proclaim Tatis is “already the face of baseball.”

MLB itself will stop just short of going all-in on Tatis.

Wednesday, 24 hours before the season begins, the league debuted its “Make It Major” campaign with a stirring 60-second video that opens and closes with Tatis.

In between, though, are a diverse and charismatic taste of 20-something stars: New Met Francisco Lindor, slugger Aaron Judge, Tim Anderson, Ronald Acuña Jr, Juan Soto and the old man of the group, Mike Trout, who – gasp! – turns 30 in August. 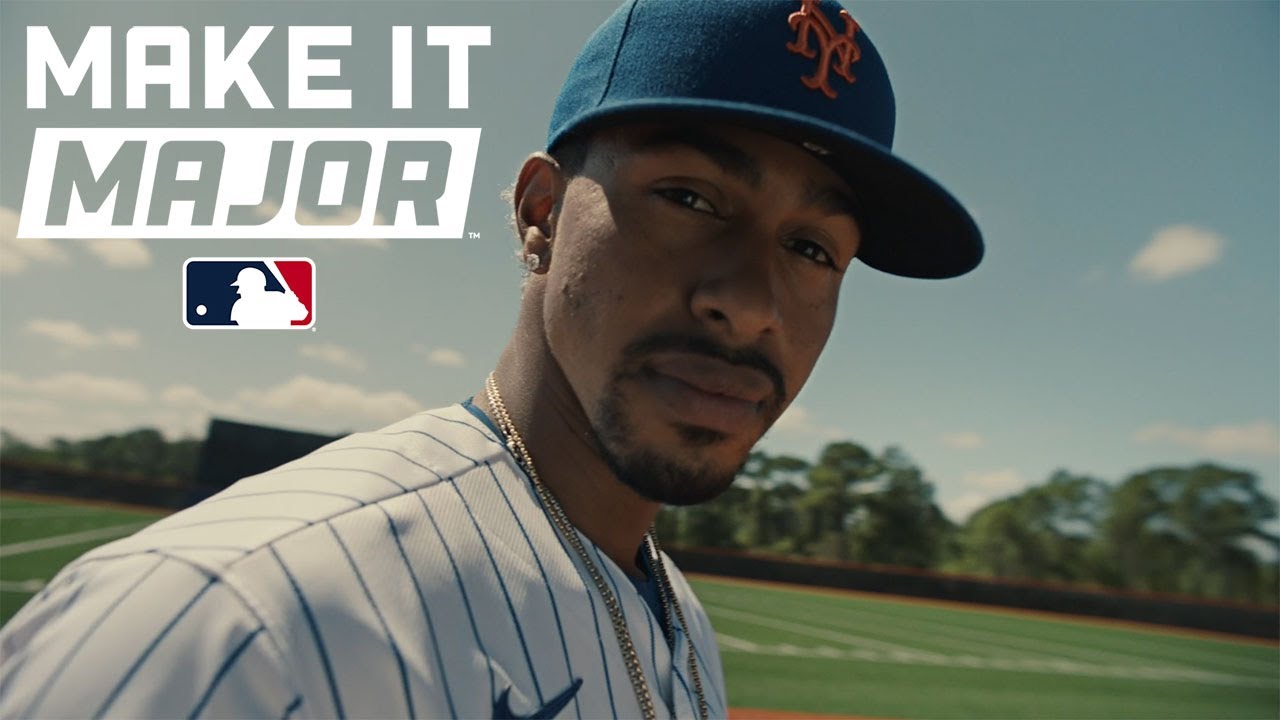 Like a craps player, MLB, for the moment, is looking to spread its chips across the table.

“We have a lot of great, talented stars to promote and are fortunate in that regard,” Barbara McHugh, MLB’s senior vice president of marketing, told USA TODAY Sports. “They’ve all got their unique authenticity, but it’s the energy, the enthusiasm, the swagger in some cases and, generally speaking, the joy they exude when they play the game.”

McHugh helped develop MLB’s “We Play Loud” campaign, which steered into swagger and away from the restrictive norms the game had long imposed on its more boisterous talents.

The league, its fans and an increasing amount of young players have spoken – best to celebrate achievements than curb enthusiasm, a concept that seems simple enough in theory yet took decades to take hold on the field.

From Chosen One to a chosen few

Oddly enough, the aforementioned group of stars are already so accomplished, they likely would have “earned” the right to watch their home runs a little longer in the less civilized times.

Acuña might be the game’s preeminent five-tool talent, a center fielder who slugged 41 home runs with 101 RBI as a 21-year-old and followed that up with a .987 OPS in the shortened 2020 season. Soto won a batting title last year, may yet win a Triple Crown and at 22 is on an arc that may place him somewhere between all-time greats Tony Gwynn and Ted Williams.

Should he strike an agreement on a contract extension with the Mets, Lindor’s significant talents will have a massive platform across town from Judge.

Tatis is riding riding shotgun in this movement, even as mass media and brands alike have occasionally stubbed their toes in their zeal to identify That Guy.

It started in 2009 and Bryce Harper, who was 16 when Sports Illustrated dubbed him “The Chosen One” on its cover and “Baseball’s LeBron” in headlining Harper’s breakneck desire to reach the big leagues.

And he didn’t disappoint, winning NL Rookie of the Year in 2012 and MVP in 2015, earning at various points designations as the “Justin Bieber of baseball” and yes, the face of the sport.

By 2014, it was growing clear that if Harper was a generational talent, Trout was an all-timer, and that despite his aw-shucks vibes, was ready to become The Face.

In 2017, it was Judge who stunned the world by setting the Yankee rookie home run record with 30 before the All-Star break, then preceded to win the Home Run Derby, scraping the Marlins Park ceiling and slamming a 518-foot shot.

A power-hitting Yankee who’d win Rookie of the Year, hit 52 home runs and finish runner-up in MVP voting? The Face of Baseball tag came from all corners, present company included, and even got the hungry endorsement of MLB’s commissioner.

By 2018, he was a more muted FOB, though even as injuries curtailed his output, by 2020 could still enter that conversation with a weeklong binge of longballs – even as the new school stole so many headlines.

Serving as The Face can be fleeting, but even if temporary, remains a significant honor.

“They might put a little more pressure on themselves the first time they hear it but in reality, I think it’s a great compliment,” says Phillies manager Joe Girardi, who played alongside and managed Jeter, was Judge’s skipper during that 2017 season and now manages Harper. “It talks to your talents and how you live your life on and off the field and the excitement you provide the game.

“It’s a responsibility, but you should take on that responsibility every day, because you want to be responsible to your family and your organization, how you act on and off the field. You might be under a microscope a little bit more. And a player should be excited about that, go out and play hard.”

Naturally, embracing that tag is good for both the league and players, who despite guaranteed contracts and no shortage of nine-figure deals like Tatis’, earn far less off the field than superstars in other sports.

According to Forbes, Dodgers ace Clayton Kershaw, at No. 57, was the best-paid big leaguer in pandemic-stricken 2020, with endorsements comprising just $750,000 of his $27 million haul. That places him lower on the list than excellent but hardly league-defining talents like New Orleans Saints receiver Michael Thomas and Toronto Raptors guard Kyle Lowry.

Fans and players alike bristle at MLB’s seeming inability to market its stars into their proper position in the sports pantheon. That’s not to say the league is not trying.

With methods of drawing and attracting eyeballs growing more unconventional with each passing year, the league is determined to equip its players with tools to gain traction in the social media space.

MLB is entering its third year of collaborating with players in providing tools and assets to spice up and amplify their online presence. McHugh said there was a 75% increase in player participation from 2019 to 2020.

This offseason, the league met with more than 30 player agencies to dig deeper on players’ interests and idiosyncrasies that might better surface a player’s personality.

MLB will provide photos, graphics, videos and highlights to players, both by request and unprompted. The league covers every game with video and photo teams, capturing the team bus arrival through any walk-off heroics, enabling players to highlight their pregame fits as well as actual baseball accomplishments.

In Jeter’s time, appearing semi-annually in the World Series was enough to establish himself as baseball’s ambassador for nearly two decades.

Today’s media landscape brings far more noise and clutter, but also a chance to go on offense if the game doesn’t cooperate.

“There’s a lot of opportunities that exist now that didn’t back in the day,” says McHugh. “If anything, it’s an ongoing evolution of creating opportunities – particularly with the younger audience.

“The younger audience identifies those new platforms and then the older generation jumps on board. If anything, there’s a lot of opportunities to capitalize on and connect our players to moments that inspire (fans).”

In many senses, MLB is stuck between eras – as it courts younger fans, it remains financially beholden to billion-dollar local and national TV contracts that prevent some fans from accessing certain games.

McHugh notes that 75% of fans who accessed their “MLB Originals” series in 2020 – such as a recurring series featuring Mets All-Star Pete Alonso – were 34 or younger, primarily accessing it on YouTube.

That dovetails with Nielsen data from the first quarter of 2020, which indicated the 18-34 demographic’s TV viewership dropped by 15.3% from the previous year. The same report indicates that group spent  almost three times as much time using apps and the web on smartphones than watching traditional TV.

Yet onerous blackout restrictions remain a hurdle for fans accessing teams in their home or nearby markets. So long as the game’s financial health is tied to massive TV deals – and the ESPNs and regional sports networks strive to use them as leverage to keep audiences from cord-cutting – that puts even more of an onus on MLB to “meet fans where they are,” as McHugh says.

And sometimes, what’s old is new.

Some 12 years after Harper’s teenage arrival on the national stage, you might say the industry is still chasing LeBron – though this pursuit involves a multi-player field.

“When you see a young player come up and gain a lot of attention – the Tatises, Acuña, Soto, the kind of players they are and the excitement they provide – it starts out as a little bit of talk and it gains momentum as time goes on and all of a sudden, that’s who everybody’s talking about,” says Girardi. “Two years ago, people probably hadn’t heard about Tatis a lot. But now, everyone has.

“People probably hadn’t heard about Acuña Jr. and Soto three or four years ago. Yeah, maybe they were prospects and you’re like, ‘Yeah, I want to see that prospect really do it.’ I think it just kind of steamrolls and probably rightfully so.

“Because it’s good for our game.”

Opinion: Jerry Jones snubbing Jimmy Johnson for Cowboys honor as coach goes to Hall is slap in the face

The days of vaccine lotteries are waning. Here come the mandates.

USA TODAY Sports picks every medal for every Olympic event

Coach purses, wallets and more are 50% off right now—shop our top picks

Afghan translator who worked for US Army reportedly beheaded by Taliban